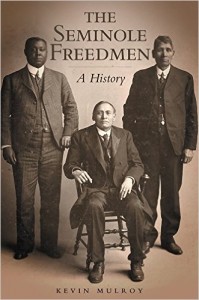 Popularly known as “Black Seminoles,” descendants of the Seminole freedmen of Indian Territory are a unique American cultural group. Now Kevin Mulroy examines the long history of these people to show that this label denies them their rightful distinctiveness. To correct misconceptions of the historical relationship between Africans and Seminole Indians, he traces the emergence of Seminole-black identity and community from their eighteenth-century Florida origins to the present day.

Arguing that the Seminole freedmen are neither Seminoles, Africans, nor “black Indians,” Mulroy proposes that they are maroon descendants who inhabit their own racial and cultural category, which he calls “Seminole maroon.” Mulroy plumbs the historical record to show clearly that, although allied with the Seminoles, these maroons formed independent and autonomous communities that dealt with European American society differently than either Indians or African Americans did.

Mulroy describes the freedmen’s experiences as runaways from southern plantations, slaves of American Indians, participants in the Seminole Wars, and emigrants to the West. He then recounts their history during the Civil War, Reconstruction, enrollment and allotment under the Dawes Act, and early Oklahoma statehood. He also considers freedmen relations with Seminoles in Oklahoma during the twentieth and early twenty-first centuries.

Although freedmen and Seminoles enjoy a partially shared past, this book shows that the freedmen’s history and culture are unique and entirely their own