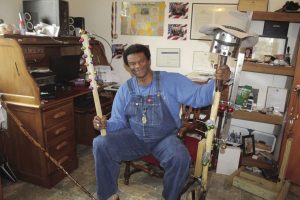 Clifton Fifer Jr. said some of the first Black families that came to Kerrville still have descendants here, long after arriving as “property” and slaves.

“I’m related by marriage to the Blanks, and the Wares and Thorntons.”

Asked about the story repeated sometimes that the Blanks family got that name by refusing to take their former slave-owner’s surname, Fifer said he’s heard that, too, but couldn’t verify its accuracy.

“Traditionally a freed slave took the owner’s names or chose another if their master was unkind,” Fifer said.

“In about 1984, my dad, Clifton Fifer Sr. started his own sanitation business after working for the city’s sanitation service. He started his own service in the county and picked up at River Hills Mall and in Kerrville South and Ingram and other places,” Clifton Jr. said.

“He also had a junk business and would collect radiators and batteries and other things, for copper. He’d collect it for about six months and stack it next to the house. Then he sold the loads twice a year. It helped pay the bills.”

He said his grandfather worked at the YO Ranch, and his Uncle Lester Fifer also was a cook there.

“Lester wrote a cookbook when he worked there, and I have a copy. But all the recipes were for 100 people or more. In the family he was known for his cinnamon rolls. They melted even before they got in your mouth,” he said.

Fifer also spoke of the portion of the Black community known as “Black Seminole Indians,” descendants of runaway slaves in the south who first lived in Florida among the Seminoles. When that tribe was forced by the U.S. government to march to Oklahoma reservations, some moved to Mexico or worked as scouts and trackers for the U.S. military, fighting other Native American tribes.

“They rode just as hard and subsisted on low rations; and were the best scouts and trackers,” Fifer said.

Their connection to Kerr County came through the “colored troops” after the Civil War, or more famously the Buffalo Soldier regiment. These young men produced four Medal of Honor winners whose descendants are known here, Lillian Warren, Sylvia Lewis and Charlie Payne.

Clifton Jr., who is 65 now, experienced in his long residency in Kerrville some of the effects of segregation.

He said Kerrville had developed to the north from the Guadalupe River about to the Home Depot location. “There was a baseball stadium for Little League and a ‘pony league.’ There was no interstate and if you wanted to go to San Antonio I think you took Highway 87 to 27. Junction was north on 27.

“I think Kerrville is about to lose its ‘country feel’ but I reckon that’s progress,” Fifer said.

He said most entertainment was segregated, and in the Black community they owned their own “juke joints” including the Famous Door and Pleasure Garden.

Kerrville North was a colorful, lively community with six juke joints in a two-country-block area, he said. They each served food, drinks and all had music, either live or from a jukebox.

The names and locations, in alphabetical order, were: The Cabin owned by Mr. and Mrs. C. W. McCray (Mrs. Carrie) at the end of Barnett Street; the Dream at the corner of Upper Street and Wallace Street owned by several different people at different times; Mrs. Ella Phelps owned and run by Mrs. Ella Phelps (her specialty was soul food) on West Davis Street; the Famous Door on West Barnett Street, run by Mr. Ed Bratcher, known throughout Kerrville for his steaks and fried chicken; and Pennick’s Green Door owned by Mr. John L. and Mrs. Beulah Pennick. First established as a music venue and meeting place for teenagers; they were known for their hamburgers, enchiladas, fries and chitlins.

“Probably the most famous of the juke joints was the Pleasure Garden run by Hilly Frazier on Webster Street. The infamous slab is still there today. ‘Uncle Hilly’ served the best barbecue in the county. Folks came from all around just to partake of his ribs, brisket, chicken and sausage. The people raved over his sauce.”

The Pleasure Garden was nothing like the name sounds, Fifer said. There was a small building housing the BBQ pit on a 9×15 slab, an old wooden building about 9×15 feet, and a huge concrete slab 54×39 feet.

During the time of segregation, he said, there were no recreation places for Black kids in Kerrville outside their community, as it was in most small Texas towns. So the people, businesses, schools and churches in the community provided entertainment for the kids.

“One of the places I remember was the Pleasure Garden. At 2 o’clock on Wednesdays, Uncle Hilly would allow kids to come in and skate on that huge slab for about an hour.

“What about the rhythm and blues scene at Pleasure Garden? Kerrville was the largest rural town in the region, and it was known for its juke joints and local bands. Even though the juke joints’ heydays were during segregation, that never stopped the juke joints from being integrated,” Fifer said. “The music, the culture, the good times seemed to draw all people together.”

Professor B.T. Wilson was not only the principal of Doyle High School, he was a musician, entertainer and songwriter along with other men here.

The following timeline of events in the life of Kerrville’s Black community is drawn from local history books including “Kerr County, Texas 1856-1976” by Clara Watkins, and the “Kerr County Album” by the Kerr County Historical Commission, with added information from Kerrville residents:

• 1852 – Mrs. Thomas Denton arrives in what would become Kerr County with her family and four slaves.

• 1856-59 – Dr. Charles de Ganahl moved to eastern Kerr County with his family and slaves, counting 21 of them by 1861. They included Theodore Blanks and his son Isaiah who helped found “The Settlement” in “Kerrsville.” Isaiah Blanks was employed by Capt. Charles Schreiner after 1865.

• 1887 – San Antonio and Aransas Pass Railroad began rail service once a day to and from San Antonio.

• About 1900 – several Black families moved to Kerr County from Bandera County due to a rabies scare in “panthers” or cougars in the area.

• About 1935 – First community school grades one through seven offered for Black residents, called “Cabbage Hill,” on block where Buzzie’s BBQ is now.

• 1941 – Ida Mosby became a nurse at Secor Hospital (Kerrville General Hospital), its first Black nurse; then back to the now-State Hospital.

• 1948 – Clifton Fifer Sr. played baseball with an all-white minor league team for one season; and coached the Black Kerrville All-Stars.

• 1949-50 – Doyle School rebuilt after a fire in the building, according to longtime residents.

• 1975 – Itasco Wilson retired from teaching in middle school after 34 years in KISD.

February until April, gathering wild onions is big event for many members of Five Civilized tribes in Oklahoma. Wild onion dinners are the fruits of their labor. The dinners are traditionally held in homes, community centers and churches. Wild onions are sometimes prepared with scrambled eggs (although not always) and poke sallet.

Some dinners have been served in the same place for nearly a century-like Haikey Chapel in Tulsa. On a recent Saturday, there was a line about a hundred deep waiting to eat wild onions with scrambled eggs, salt pork, beans, corn, fry bread and grape dumplings. Some have attended this dinner since they were kids, others were in line for the first time. Many said it was the cooking that kept them coming back.

Haikey Chapel has a long history in the community and many descendants of the original family attend church here-one was even doing the cooking on Saturday-Sunrise Tiger Ross. As she sauteed onions alongside her sister and cousin in a tent near the church she said, “Hopefully our grandmothers are happy with what we’re serving today.”